Trying on the Apple Watch

When the Apple Watch was announced late last year, I knew I wanted one. But yet, as preorders were announced and the 24th April came and went, I resisted preordering one just yet. First of all, I wanted to try one on for myself, and make sure I pick the right watch to start with. Not that I’m rushed for time, with current orders not shipping until June. And I’m not exactly a stranger to smartwatches, with a Pebble living on my wrist for the last year or so. So today, I went into an Apple Store, and went “hands on” (or should that be wrists?) with the Apple Watch.

This morning I jumped on the Apple website, and made myself a reservation for an Apple Watch try on appointment for this afternoon.

After arriving, talking to one of the staff members at the front of the store brought me to another staff member standing by one of the tables with the Apple Watches, of course. Asked what watches I wanted to try, I decided on the 38mm Apple Watch Sport, and the 42mm Apple Watch with a leather band. Underneath the table, a draw slides out to reveal a tray full of different watches with different bands.

Staff helped put the sport watch on my wrist to start, and started the demo video loop playing. While the watches aren’t ‘live’ in that you can’t use them and open apps, the demo video does include the new ‘taps’ for feedback (vibrations) from the taptic engine. The taps are really nice, comparing them to the Pebble which has quite a violent and ‘loud’ vibration – so much so it spends half of it’s time disabled.

First off – the 38mm watch is much smaller than I imagined. It sure feels smaller than the Pebble – and I think the 38mm will be too small for me. However – I really like the aluminum sport watch, and I think it’s the model for me. The sport band is really nice – it doesn’t feel like rubber at all, and I’d be more than happy wearing it.

Next, I tried the 42mm Stainless Steel Apple Watch – and the 42mm is definitely the right size – not being as large as I had anticipated. The leather watch band wasn’t too bad either – perhaps I’d spend my time swapping between the sport and leather bands. But I wasn’t a fan of the Milanese Band – it was ‘ok’, but I wouldn’t wear it day to day I think.

After trying the watches over, I went over to find a watch on a demo stand I could play with. 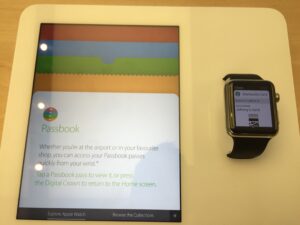 The interface wasn’t ‘too’ confusing, but I’ve been reading up on the watch for a while now, so I vaguely knew what I was in for. The most confusing part is using the digital crown and working out when pressing it will take me back to the app list, or back to the watch face, or back within an app. The button below the digital crown almost seems like a waste in my opinion not being able to change what it does – I don’t have any more than a handful of contacts I’d be in touch with regularly, so it’d be nice to change what the button does.

Overall, I’d love to see what ‘actual’ apps look like on the Watch, such as the Qantas, Woolworths, Uber or NextThere apps. I also think it’s great to see Passbook on the watch, being something that doesn’t exist on Pebble, and isn’t quite matched with Google and Google Now.

Of course – there would be nothing better than having Apple Pay in Australia, but I’ve waited this long…

I think I’ll be waiting to see if shipping times improve, or if they become available through other retailers, such as Apple Resellers, or carriers like Telstra.

It’d make for a great birthday present by September…